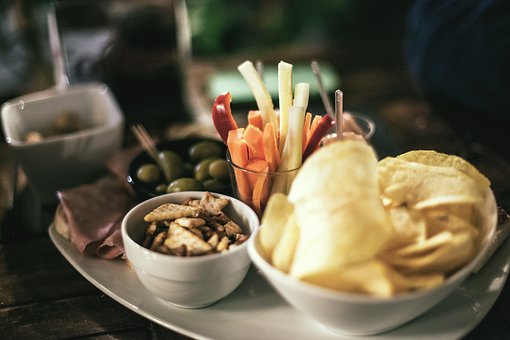 A tapa is an appetizer or snack in Spanish cuisine and translates to a small portion of any kind of food, very similar to Chinese dim sum. It may be hot or cold. In the first days of tapas, a piece of cheese or ham was served with your drink and put over the mouth of the glass (saved on washing plates). They were basically designed to tide one over until the traditional way of eating dinner very late in the evening, when most Americans are already sleeping. It may be cold (such as mixed olives and cheese) or hot (such as chopitos, which are fried baby squid). In select bars in Spain, tapas have developed into an entire sophisticated cuisine.

Legend has it that Castilian King Alfonso the Tenth (circa late 13th century) had formerly been stricken with a severe illness which only allowed him to consume tiny portions of food with small quantities of wine. (Maybe he just got too hungry between lunch and dinner.) The U.S. has adopted this cuisine through tapas restaurants, wine bars and a few micro breweries, as opposed to Spain, where it’s usually served up in easy tapas bars. Popular dishes include many traditional Spanish delicacies which are worth trying (be very courageous, now):

Aceitunas – assorted olives (no meal is complete without them)

Berenjenas – eggplant/ (aubergine) can be raw or cooked

Chipirones – a bit different, little squid cooked on a griddle

Salchichón – any spicy sausage or salami

Tortilla – omelette with potato and onion (not like the Mexican tortilla)

Sorry, no mac and cheese

If you’re overwhelmed or confused, ask the server for aid. One of the great benefits is that someone at your table is very likely to enjoy a dish that maybe no one else does, so it will not go to waste.

For many, tapas is an acquired taste. For others, simply not their cup of tea. However, it’s definitely worth a try with a few good friends (who are culinary”great sports”). It just might lead to a new cuisine for the adventurous diner, so take a look. You can do it.