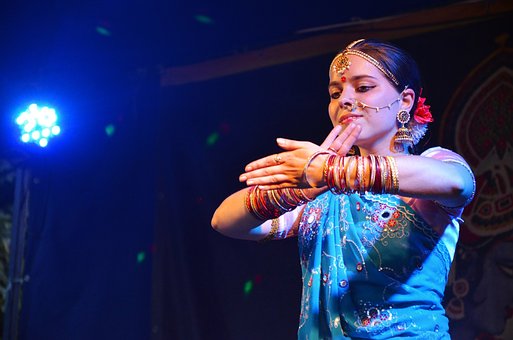 And what better attribute of the nation could depict this compared to Indian dance forms. The traditional dances of India have distinct styles. This is so because the dance forms belong to diverse parts of the nation – they originated there and then developed with the cultural elements.

There are a great many folk dances which belong to different regions of the country and are primarily performed by the regional people of that specific region only. The Indian film dances also hold an important place in the culture of the nation.

The dance forms of India have their origin since the early Vedic period wherein individuals used to gratify into singing and dancing for entertainment and recreational purposes. The Hindu text Natya Shastra includes all the earliest compilations of the ancient dance forms.

From these early dance forms have been derived the classical dances of India. Let us get an insight into the popular dances of the country.

Bharatanatyam
This is largely performed on Carnatic music. Earlier, the dance was performed only in Hindu temples and in other spiritual places. Bharatanatyam used to be a solo dance form performed only by girls and depicted religious thoughts and spiritual themes. During the British era, this dance form was curbed and ridiculed. But, it went on to become one of the most famous traditional dances of India.

Kathakali
This is the most stylized dance form (essentially a dance drama) that belongs to Kerala. Kathakali is a 17th-century dance form which is performed like a story-play and has very colourful and elaborate costumes, makeup, as well as face masks. Unlike other Indian dance forms, Kathakali is performed mainly by men. It was also traditionally performed in temples and spiritual chambers. The dance movements are integrated from the early athletic traditions and martial arts of South India.

Kathak
This dance form belongs to North India, and the title’Kathak’ has been taken from the Sanskrit work’katha’ which means’story’. Hence, Kathak is’the one who tells the story’. It majorly consists of passionate and childhood stories of Lord Krishna. Ghungroo (little bells) is the main element and involves rhythmic body movements with facial expressions.

Kuchipudi
Kuchipudi is a dance form of Andhra Pradesh. Like other major classical Indian dances, Kuchipudi also has its roots and developed as a spiritual performing art. According to history, this dance was originally performed by Brahmin males, but both women and men perform this dance.

Odissi
This dance belongs to Odisha, the coastal state of Eastern India. Odissi is a dance-drama style performing art, practiced traditionally by women to express spiritual themes and spiritual ideas. The dancing is accompanied by musicians, wherein they narrate mythical stories, and the dancers perform wearing symbolic costumes with rhythmic motions, facial expressions and gestures.

Manipuri
As the name suggests, this dance form is in the North-Eastern Indian state of Manipur. This dance form takes its inspiration from the Raslila of Radha-Krishna and portrays these love-inspired dances. Manipuri is performed in a group and has a very unique and special costume called Kumil, which is a beautifully decorated skirt in the form of a barrel. This is a really graceful dance which majorly involves movements of the upper body.

Mohiniyattam
This dance form of Kerala takes its name from the seductress avatar of the Hindu God Vishnu, Mohini, who lured the evil demons to assist good prevail over the evil. Mohiniyattam is a Lasya style dance that’s feminine in nature and comprises delicate body movements. This is a slow dance solo performance by girls.

So, these were the most famous traditional dances of India and a little history about their origins. Aside from these, there are other folk and tribal dances too that indicate the significance of Indian culture.